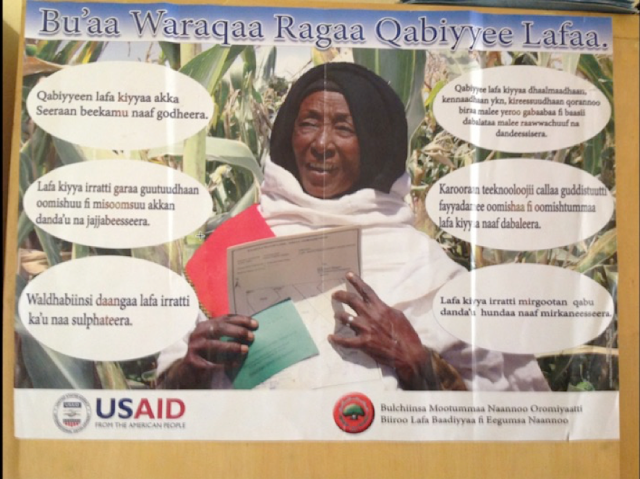 Photo in the office of a local official at Adami Tulu Jido Kombolcha,Bureau of Rural Land and Environmental Protection, Ethiopia, Dec. 2014.

My paper, Rural Land Registration in Ethiopia: Myths and Realities, considers the social consequences of rural land registration in Ethiopia, a countrywide program funded by Western development agencies in a recent wave of land registration initiatives spanning across Africa and developing countries elsewhere. In the past, policymakers in many African countries viewed traditional tenures as anachronistic obstacles to economic development and social progress and enacted centralized reforms to standardize local land tenure arrangements. The new registration initiatives are premised on what I call “pluralist formalization”, that is, a commitment to regularize local land tenures by recognizing customary interests, in order to promote land markets and strengthen the security of land rights, especially those of women and vulnerable social groups.

A poster in the office of a local official in Ethiopia showcases what the donors and officials believe to be the consequences of the land registration program. Captioned “The Benefits of My Land Certificate”, the poster shows an elderly woman dressed in traditional costume holding up a certificate. She declares, “My land rights are recognized by the law”; “I am protecting my land and harvesting more”; “I have few land disputes”; “I can donate, bequeath, rent, or transfer my land without prolonged processes and with little cost”; “I am using technology and farm-extension inputs to increase my production and productivity”; and “this certificate has confirmed all the rights I have regarding my land.”

The fieldwork evidence presented in my paper, however, shows that serious problems face Ethiopia’s land registration initiative. Customary interests in land often go unrecognized, partly because the formal records do not accommodate the flexibilities and nuances inherent in local tenures. Further, the introduction of legal formalities and written records have diminished the bargaining power of smallholders who rent land to commercial farmers. As recording one’s land rights requires access to government offices that are often far away, the new system has become more complex and expensive for rural dwellers, who must rely on others to interpret the written documents and use formal governmental services.

In addition, the registration has shifted power from households and communities to state officials without providing adequate mechanisms to hold local leaders and business managers accountable. Officials use the records to expropriate land, working against the rights and interests of women and vulnerable persons, who are supposed to benefit from the land registration program. Influential individuals have used the registration process to legalize private enclosures of common grazing lands and illegal appropriations of land belonging to other people.

Registration is not a simple formality. It creates winners and losers, usually along the lines of the existing distribution of power and property, entrenching inequalities of class, gender, ethnicity and other social cleavages. Land registration in an imperfect structural environment tends to produce imperfect outcomes.

April 09, 2020
Jailing Immigrant Detainees: A National Study of County Participation in Immigration Detention, 1983-2013 Emily Ryo Professor of Law & Sociology University of Southern California Gould School of Law Ian Peacock Ph.D. Candidate University of California, Los Angeles Department of Sociology Immigration and Customs Enforcement (ICE) pays hundreds of county jails in the United States to detain immigrants facing removal proceedings.   Removal proceedings are civil proceedings against individuals alleged to have violated immigration laws.   Immigration detention therefore presents a striking case of how penal institutions are used for civil confinement purposes.   Yet we know very little about what types of counties have come to participate in this arrangement and the predictors of their participation.   Using diverse sources of county-level data that span multiple decades, we conducted the first national study of the role of loca
Read more