Relieving the Tension: Lay Immigration Lawyering and the Management of Legal Violence 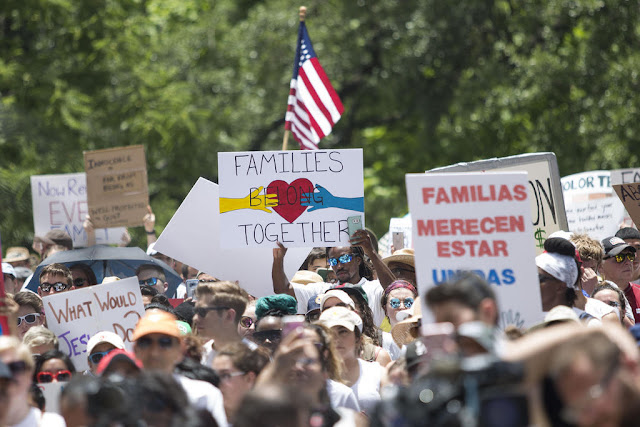 Picture: Dominguez/Kut, R. (2018, June 30). Thousands gather at the steps of the Texas Capitol to rally against the recent immigration crackdown along the U.S./Mexico border. [Digital image]. Retrieved from http://www.kut.org/post/thousands-protest-trumps-zero-tolerance-immigration-policy-austin

News about the Trump Administration’s “zero tolerance” border policy understandably sent us into collective shock. But it’s important to note that a lot of what happened was not all that new. This particular set of atrocities took place against a legal backdrop where the U.S. has routinely denied basic rights to many immigrants and refugees. Unlike in criminal cases, for example, immigrants are not guaranteed access to counsel. One recent study found that only 37% of immigrants had legal representation in deportation proceedings.

My article, “Relieving the Tension: Lay Immigration Lawyering and the Management of Legal Violence” examines the Recognition & Accreditation Program (R&A Program), which is intended to fill this void by increasing access to representation for indigent immigrants. It authorizes certain non-lawyers, or “Accredited Representatives” (ARs), to practice immigration law out of non-profit or faith-based organizations on the condition that they charge only “nominal fees.” Lay lawyers are studied far less often than licensed attorneys, yet lay lawyers are on the front lines of guiding immigrants through the legal system.

The trend in immigration law and policy is toward devolution: transferring essential governmental responsibilities to organizations and citizens. How does the program serve justice in an immigration regime that has been notoriously harsh?

Whereas much of the debate over this program has been about whether ARs will “win” as often as their professionally-trained counterparts, I came at the issue somewhat differently. Reason being, I noticed that it wasn’t only their lack of formal training that made ARs distinct. Most ARs are women (approximately 74%, compared to 57% of immigration attorneys and only 36% of lawyers generally); a disproportionate number appear to be immigrants themselves; and many of the ARs I interviewed told me they came to this work not with careerist ambitions but because they felt called to it by their values or their faith.

ARs described how their life experiences have led them to work in a way that places a high priority on their clients’ well-being. Sometimes they talked about providing their clients with holistic services – offering general advice, companionship, or simply hope – in contrast to cultural imagery of lawyers who track billable hours and see a case rather than a person. At other times, rather than challenging law’s characteristic rigidity, they embraced it. Aware of the high-costs associated with a legal error, many described being hyper-attentive to legal minutiae.

This program may also be providing a number of ancillary benefits to the state. When ARs provide emotional labor to clients confronting state violence, family separation, and the like, they aren’t so much altering what is to come but rather preparing their clients for it. When ARs fill out paperwork, correct errors, and help clients get their forms in order, they are also relieving the state of a huge bureaucratic burden. In short, even though their intent is undoubtedly altruistic, from the perspective of the state, ARs are doing work that prepares their clients to be “processed” by the immigration system at no cost to the government.

The R&A Program therefore represents far more than a potential “solution” to the problem of immigrant representation. Ideas differ about what counts as good lawyering; the R&A program serves as window into how immigration governance is carried out. It shows that beyond the day-to-day state violence of the current immigration regime in the United States, the burdens of managing such violence are being passed down to the very marginalized groups – women, immigrants, etc. – who have been historically excluded from the legal profession.