Biased and discriminatory behavior toward gender, racial, and ethnic minorities continues to affect many sectors of American society. The 2016 U.S. presidential election provides just the most recent high profile example of this phenomenon. Vigorous debate erupted throughout the campaign about the ways in which gender shaped public perceptions of both candidates, and the extent to which Hilary Clinton was harmed or helped by being the first woman nominated for president by a major political party.

We argue that white and male senators will be more skeptical of the professional competence of minority and female nominees than they are of white and male nominees. We measure this by examining the prevalence of “judicial philosophy” questions directed toward female and minority nominees relative to their male and white counterparts. We use this measure because questions about judicial philosophy are the device used by senators to explore how a future justice will go about the core duty of Supreme Court justices: interpreting the U.S. Constitution. Nominees who use the “wrong” method of interpretation will - in the eyes of the questioning senator - fail at this essential task. Consequently, senators’ implicit biases and lack of relative confidence in female and minority nominees’ professional competence to serve on the Court may result in more aggressive questioning on these nominees’ judicial philosophies.

Figure 1. The Percentage of Judicial Philosophy Questions Nominees Received from Opposite and Same Party Senators, 1967-2010 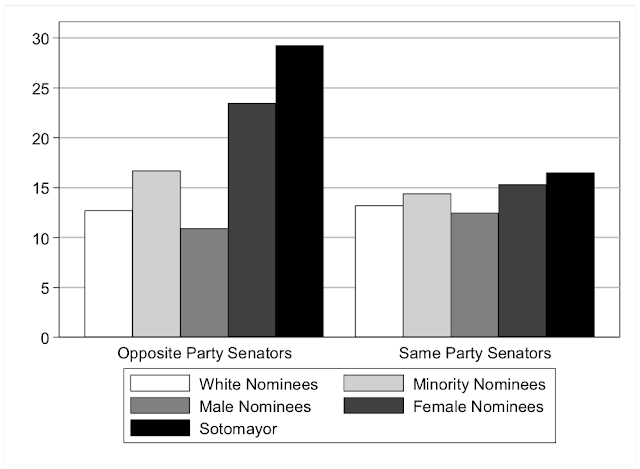 As shown in Figure 1, this is exactly what happens at the hearings, at least in regard to female nominees. Female nominees being questioned by opposite party senators are asked 10 percent more questions about judicial philosophy than are their male counterparts (after controlling for other factors). And while we found no overall effect on this measure for minority nominees, it is notable that the strongest effect among the female nominees was in the questioning of Justice Sonia Sotomayor – the only nominee in our data to be both a woman and a member of a racial minority group.

Our results reveal that even being among the most accomplished lawyers of their generations does not immunize female Supreme Court nominees from gender bias in the workplace. Whether because the questioning senators are more skeptical of the ability of female nominees to competently perform the core judicial task of constitutional adjudication, or because the senators see it as a winning strategy to cast doubt on their ability to do so, female nominees at their Supreme Court confirmation hearings face a confirmation process that is quite different than that of their male counterparts.